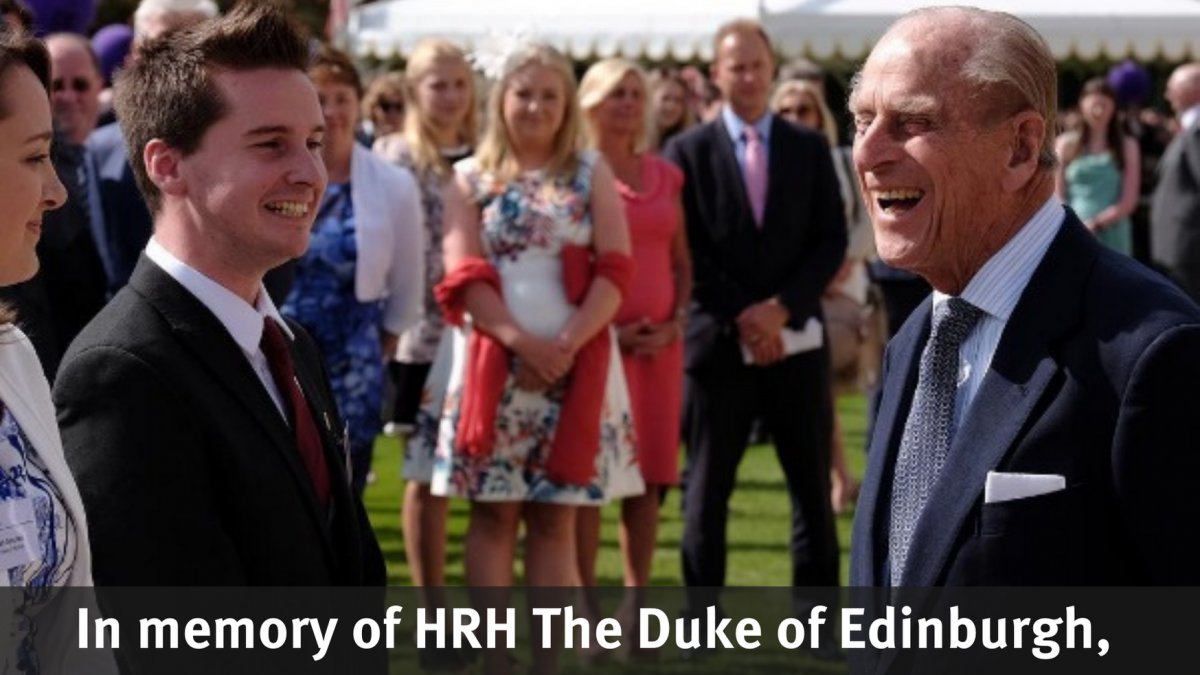 Celebrating the life of HRH The Prince Philip, Duke of Edinburgh, KG, KT

Celebrating the life of HRH The Prince Philip, Duke of Edinburgh, KG, KT

An inspirational and committed champion of young people worldwide

It is with great sadness that The President’s Award for Youth Empowerment acknowledges the death of our Founder HRH The Duke of Edinburgh KG, KT.

Sixty-five years ago, His Royal Highness established The Duke of Edinburgh’s Award in the UK. Since then, it has been delivered in more than 130 countries and territories, equipping and empowering millions of young people to build the skills, confidence and resilience they need to support their communities and be ready for the world.

John May, Secretary General of The Duke of Edinburgh’s International Award Foundation says:

‘The International Award family mourns the loss of our inspirational Founder. Prince Philip’s belief in the infinite potential of young people, coupled with his championing of non-formal education and learning, positioned him as a leader and thinker of truly global stature.

Through the personal leadership and involvement of Prince Philip, the Award that bears his name has transformed the lives of millions of young people since it started in 1956 and has impacted countless more in local communities.   As young people face exceptional challenge and change in the wake of the current pandemic, this “do-it-yourself growing-up kit”, as he described it, is even more relevant today than ever.

His Royal Highness’s passion for, and commitment to, the work of the Award and the development of young people continued until the last. His determination, energy and enthusiasm will be greatly missed.’

From its founding, The Duke has been committed to ensuring the Award is accessible to young people of all backgrounds. Around the world, the Award has provided opportunities to at risk and marginalised young individuals, including post-conflict communities (Cote d`Ivoire; Uganda); disability groups (Indonesia); indigenous peoples (Belize, Australia) and young offenders (Ghana, South Africa).

The President’s Award for Youth Empowerment is proudly the Duke of Edinburgh’s International Award in South Africa and has been implementing since 1983. The Award was re-launched as The President’s Award for Youth Empowerment in 1994 with former President Nelson Mandela as its Founding Patron-In-Chief. Currently, His Excellency President Cyril Ramaphosa is the Patron-In-Chief of the organisation and the certificates the youth acquire have the signatures of His Excellency President Ramaphosa and HRH The Duke of Edinburgh. The certificates are globally recognised by institutions of higher learning and potential employers increasing access to higher education and employability.

The Award Programme is available to all 14–24 year olds, regardless of their background, culture, physical ability, skills and interests. The Award is currently implemented in Independent and Government Schools, Tertiary Institutions, Residential Youth Care Facilities, Correctional Centres, Secure Care Centres, Community Based Organizations, Faith Based Organizations and is also available to individuals. Over the past decade, more than 60 000 youth have developed themselves through The President’s Award Programme in South Africa.

Every year, more than a million young people participate in the Award worldwide, supported by around 200,000 volunteers. Whilst it is known by a number of different names globally – from The President’s Award in South Africa, to The International Award for Young People in India, the framework remains the same.

‘As we mark the extraordinary life of The Duke of Edinburgh, we are resolutely committed to ensuring His Royal Highness’s vision for the Award continues to grow and reach even more young people worldwide in the years to come, under the Chairmanship of HRH The Earl of Wessex.’

At this time, the International Award family encourages anyone who would like to share a message of condolence, or memories of the Award and what it means to them to visit www.facebook.com/intaward. 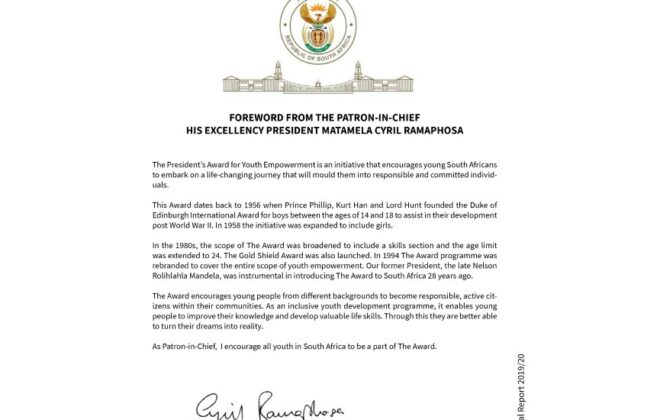 Foreword from the patron-in-chief his excellency President Cyril Ramaphosa

has been added to the cart. View Cart

It says I have 10 minutes to complete payment?

For your enrolment form to be entered successfully, we require you to pay at the same time that you enrol. If not, then you will be asked to re-enter your information in the enrolment form.

But what if I don’t have enough time?

Don’t worry, the following step is just payment. If you can’t complete it now, feel free to come back when you have the time to finish the process.

For more than 35 years, The President’s Award has been making sure that young people develop a lifestyle that gives them the valuable life skills required to pursue their ambitions . We aim to make this opportunity available to every single young person in South Africa.

This can only happen with your help

Click on a donation type below to help our programme.